It appeared in larger saloons and sports cars of the 1960s and early 1970s.

This is a very popular replacement distributor with owners of the Triumph TR5, TR6, GT6, 2500 as well as Jaguar XJ, Rover P5, Reliant Scimitar and of course the MGC/MGC GT.

When we developed our Lucas 25D6 distributor we wanted to improve on some of the known areas of weakness in the original 25D6.

We applied our knowledge of the 25D 4 Cylinder distributor and added an additional oil seal to the shaft, just like Lucas did when they upgraded the 25D 4 cylinder to the 45D.

This extra oil seal makes our distributor longer lasting than other alternatives that are out there.

Electronic variants of this distributor replace the original points with a Powerspark ignition module, which uses a simple magnetic trigger ring to sense ignition instead of traditional points.

Aesthetically this distributor is indistinguishable from the original items from the 1970s. It has a tamper proof vacuum advance unit with later push on vacuum connection.

We offer this The Lucas 25D6 Electronic the following combinations:

Fitment of the Lucas 25D6 Distributor includes (and is not limited to:

About Points, Electronic and High Energy Distributors from Powerspark Ignition:

The traditional ignition system used in most cars up until the 1980s.

- To be used with a Standard or Sports ignition coil, resistance reading above 1.4 ohms. OK to use copper HT Leads.

Looks like an original points distributor but contains an electronic ignition module that uses a magnetic pickup instead of contact breaker points.

- To be used with a Standard or Sports ignition coil, resistance reading above 1.4 ohms. Not suitable for use with copper HT Leads

- To be used with a High Energy ignition coil, resistance reading below 1.4 ohms. Not suitable for use with copper HT Leads 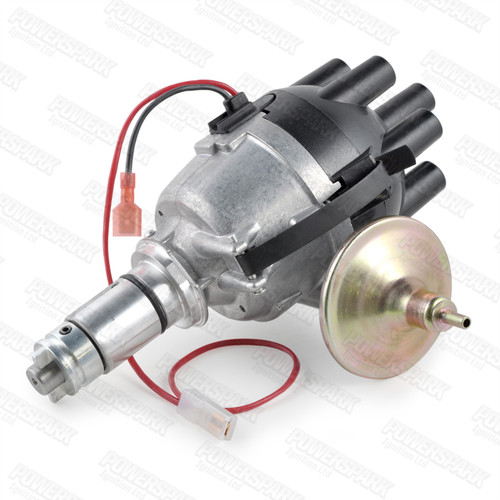