This high quality reproduction has been selling for over 15 years. The advance curve is specific to 6 cylinder vehicles.

We offer this distributor in Points, Electronic and High Energy versions as well as positive earth.

Points versions come with a brand new points set inside. Electronic variants come with the patented Powerspark Electronic Ignition module inside to make running and starting easier and smoother.

A non vacuum variant is also available, which is more suitable for race and track vehicles.

Our Powerspark Lucas 45D6 distributors are are available as follows:

Fitment of the Lucas 45D6 6 Cylinder Distributor includes and is not limited to:

About Points, Electronic and High Energy Distributors from Powerspark Ignition:

The traditional ignition system used in most cars up until the 1980s.

- To be used with a Standard or Sports ignition coil, resistance reading above 1.4 ohms. OK to use copper HT Leads.

Looks like an original points distributor but contains an electronic ignition module that uses a magnetic pickup instead of contact breaker points.

- To be used with a Standard or Sports ignition coil, resistance reading above 1.4 ohms. Not suitable for use with copper HT Leads

- To be used with a High Energy ignition coil, resistance reading below 1.4 ohms. Not suitable for use with copper HT Leads 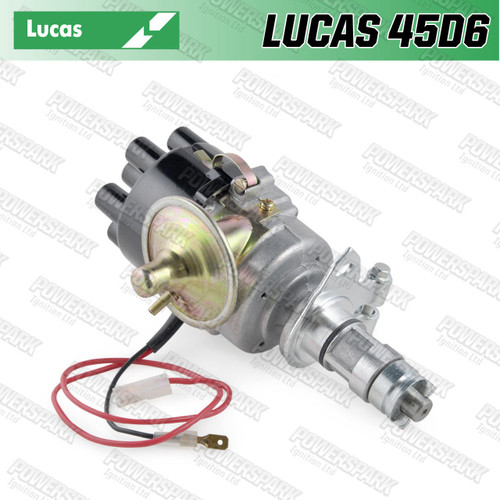